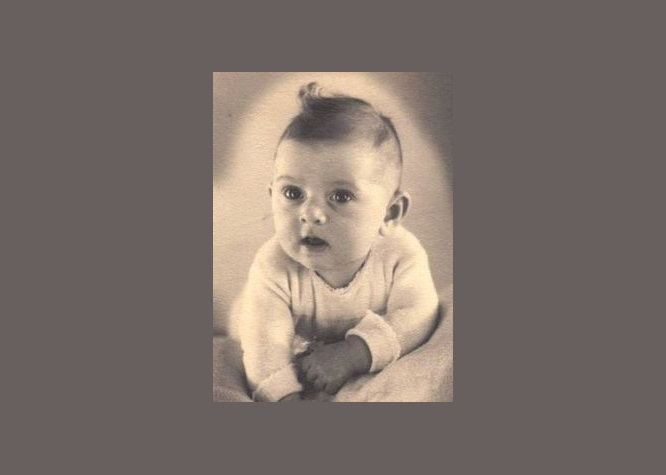 Look into the eyes of the child in the photograph. Her name was Alida Baruch, and she was a Dutch Jew. Born on January 26th, 1942, in Amsterdam, she was murdered in the gas chambers in Auschwitz after selection in July 1942.

Every day, the Auschwitz Museum puts up photographs of victims of the Shoah on its Twitter account. Every day, I retweet one, so that I always remember where man’s inhumanity to man can lead. Every day there is another life to reflect on, sometimes a solemn little boy, captured in his best suit, a laughing girl, a kind-faced woman, bent with toil, an elderly man, gaunt and terrified. Yesterday it was Alida, who would have reached her 79th birthday in January this year. Who knows what strength, what love, what beauty she would have brought into the world over her years, had she lived?

This child, Alida, her eyes curious, aware, full of light, this child, her potential snuffed out like a candle, is every child who has died because of hatred.

This child died because a society allowed itself to descend to greater and greater cruelties, because people believed politicians who promised them that the answer to their hatred was to kill its objects, because people willingly shut their eyes to where their government was leading them when its policies pandered to their prejudices.

This child is the broken body tossed onto a Channel shore after falling from a broken boat. This child shivers in a camp in America, separated from her parents. This child starves in Darfur, sickens in Yemen, is beaten by guards in Nauru.

For the sake of this child, and every child, we cannot falter in calling every government to account, in fighting for justice and equality, in rightful anger and strong action against the forces that see this child as unworthy of life.

Because it is a choice. It is always a choice. Poor and weary, sick and heartsore though we be, all it takes for evil to triumph is for the good to choose to do nothing.

We fight so that the atrocity which took this child’s life will never rise to take other lives again.